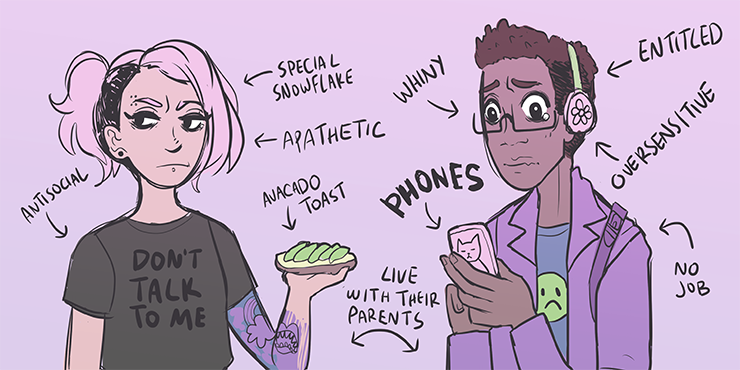 I’m sure the title got your attention in the way I intended, and if it did, you may be disappointed by the rest of this blog.  However, if you want to get a different perspective on this seemingly never-ending “millennial conversation”, please read on.

I am admittedly a content junkie, so I have an appreciation for a good topic with some legs to it.  However, after years of being bombarded by content mostly suggesting that “millennials” are going to be the end of civilization as we know it, I felt the need to chime in with my own self-absorbed, soon to be 41-year-old perspectives.

The fact that anyone wants to stereotype a generation based on a randomly selected period of time is frankly, absurd. We as humans evolve and adapt to the world we live in.  This includes everyone from “The Greatest Generation” (and yes they were born and lived through the most tumultuous times in world history) to the “Hippies”, to the “Me Generation”, to the Gen “X”ers, and now the “Millennials”.  Every previous generation finds fault in, and is frustrated by, those that follow them.  I am personally very thankful for the fact that people want to continuously innovate the world we live in.  Whether or not I always agree with how we do that is something I have to deal with.

Age has nothing to do with being ambitious or lazy

Every day I see people young and old who lack ambition, drive, and direction.  And every day I also see people who get out of bed (yes, some later than others) with a passion for making things happen.  What I don’t see is a clear distinction of these traits based on their birth year.  In my opinion, this is really about two factors: the environment they grew up in, and how driven the individual is to achieve their version of success.

I am fortunate to have a great group of these so called “Millennials” to work with on a daily basis.  Do we have different points of view, and perspectives? YES.  Do we have different goals and aspirations and ideas of how to achieve them? YES.  Does it make one person’s version of that better than the others? NO.  I’ll be the first one to admit that I don’t subscribe to some others people’s versions, but it isn’t because of when they were born.  It is simply because we have different perspectives and approaches. What matters is that we find a way to work together and contribute in a meaningful way to achieving a common goal that we all benefit from.

Age has nothing to do with being tech savvy or not

This notion that “Millennials” are all more tech savvy than their predecessors is as ignorant as perpetuating any other stereotype that people generally frown upon.  Have they grown up in a world that offers more technology than any before? Of course!  WE ALL DID!!  Just because I had a sweet Atari 2600 when I was a kid didn’t make me a Microsoft Office wiz,  and just like those that grew up during the industrial revolution didn’t mean that everyone was a gear head.  You know who is tech savvy?  Anyone who has a passion for technology and exploring the possibilities that it holds.  I know people in their teens, 20’s, 30’s, 40’s, 50’s, and yes even their 60’s who are tech savvy.

Every generation has wanted different things from “work”

Why does it seem like everyone feels that they are experiencing some new phenomena?  Work is just that… work.  Some enjoy it more than others.  Some are more tolerant of “how it has always been done” than others.  Evolving the workplace has been going on since the beginning of time.  Oh, by the way, everyone that is in the workplace today has benefited from the struggles of previous generations to change it.  Is it always convenient? NO.  Is it always productive? NO.  But keep in mind this desire to do things differently, regardless of how painful it can be, has typically resulted in exponentially safer, healthier, more productive and meaningful work for us all.  And yes, even as a business owner we have been forced to evolve even though we might have a pretty good thing going.

I could probably highlight a dozen other ridiculous and hypocritical stereotypes that are being applied to “Millennials” today.  And if I think about it, it is impossible to think of a “generation” that hasn’t experienced their own version of the exact same thing.  My point to all of this is simple, WE NEED TO QUIT DOING IT.  I can personally say I’ve been guilty of judging a book by its cover many times in my life.  What I’ve realized as I get older and have had more experiences and exposure to different people is that doing so is ignorant.

The next time you find yourself on the verge of uttering the words “typical millennial”, pause for a moment.  We have all been there.  Every interaction is an opportunity to learn about someone and potentially share some wisdom.  I might be a slow learner, but at 41 I find when I do engage with someone, good things usually come from it for me, for them, or for everyone.

So to put a fine point on this… Yes, I am anti “Millennial” because I am interested in working with as many insightful, thoughtful, talented, well-intentioned, hard-working human beings as I can be and I don’t think your generational label has a thing to do with it.

Want to learn more about how an SDI learning
solution could benefit your organization?