How Does a Global Company Implement a Large-Scale Leadership Program?

Founded in 1912, Steelcase is not only one of the oldest names in innovative office furniture—it is also the largest contract office furniture manufacturer in the world, with offices around the globe. Today, Steelcase is no longer confined to its founding city of Grand Rapids, Michigan, but it is also presented with a new set of issues as a global leader. With geographical barriers, Steelcase needed to implement consistency in leadership and functional development. To rebuild a consistent leadership model, Steelcase approached SDI, looking for a different program that would be engaging and user-driven. The proposed program became known as the Global Leadership Development Experience (GLDE), highlighting the program’s need for a global perspective of leadership and an experiential learning process.

For over a decade, SDI has partnered with Steelcase University to build leadership and development programs that could be used to consistently train leaders. The intention of this program was to engage potential leaders to develop the skills needed to manage problems and understand how to work with staff. While this program was historically adequate, it became outdated; the program was designed to teach skills in a more traditional setting, which did not align with the current needs of leaders. The program was also not consistently available to the global leaders Steelcase gained as it grew, and it did not engage contemporary users. The program had never been updated, so it was no longer appealing to users, making it ineffective for Steelcase’s user-focused values.

Eventually, Steelcase stopped using the program, which caused additional problems for their leadership development. There was no program that clearly defined what it meant to be a leader at Steelcase. This resulted in inconsistencies with leadership styles and a lack of direction for those hoping to grow into leadership roles. Steelcase University wanted a training program that would reinvent itself as a global leader, focused on the development of leaders.

The first step in rebuilding a leadership and development program was to have a collaborative conversation with the current senior leadership to explicitly define leadership values within the organization. This step was crucial—before considering how to implement a consistent leadership program throughout Steelcase’s global enterprise, the current leaders needed to be thinking about leadership in the same framework as well.

The discussions yielded the core leadership values the program needed to convey and engage users in. In order to create effective leaders in a global corporation, the program would need to shift their focus to a more strategic and contemporary set of leadership skills: communicating effectively, building strong organizational structures, and collaborating globally. Once this information was structured into performance models, we prioritized and defined which experiences and learning solutions needed to be created to drive learner performance.

In order for the program to succeed, SDI and Steelcase needed to take a different approach from the prior program—one that emphasizes user experience and an interactive, engaging learning environment. Therefore, we had to first consider the needs of the learners. The program would need to be more than a tactical delivery of information. It would need to be more interactive and emphasize both learning and implementation of knowledge and skills.

Based on these needs, SDI began designing a blended learning program, focused on both acquiring knowledge and applying it. It had to have an integrated structure where content would be taught in an interactive classroom and then implemented at a later time. We designed the program to be global, using 85 leaders from several countries for the pilot. The program was more flexible, providing the opportunity for users to develop their own learning styles and process. It allowed learners to control their own development, a crucial aspect in enhancing individual user engagement. 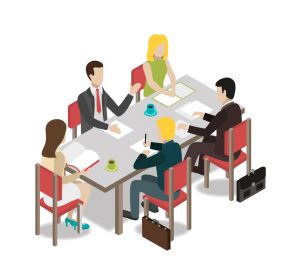 The prioritized leadership values became the curriculum structure for the program, engaging leaders in the needs of the company and the central requirements for being a progressive leader. SDI built most of the curriculum from scratch, integrated with the company’s other resources. Throughout the year-long program, GLDE was designed to have 8, 2-3 day formal learning experiences in a classroom setting. Learners would spend the month in between classes applying what they learned. This was designed to ensure an effective transition from knowledge acquisition to knowledge implementation. At select points in the course, they would have collaborative exercises offline to discuss their experiences and reinforce the learning by consistently engaging with peers. Learners also had “homework” exercises and an online network where they could collaborate and communicate. The program leveraged a selection of books and informational learning resources. It also contained scavenger hunt type activities centered around Steelcase, engaging the users in learning more about the company. The program also provided several roundtable discussions between older leaders and new leaders to engage in a dialogue about the current leadership landscape. Facilitating learning in both physical and online spaces was a necessary part of the design to meet the needs of diverse learners.

SDI implemented the pilot program over twelve months to 85 leaders from various levels (senior, current, or new) of Steelcase’s global locations. These 85 leaders participated in the program to create a consistent foundation for individual and collective growth. Given the scope and size of the pilot, several opportunities were identified to refine various aspects of the program to ensure it delivered the results that were initially intended. The strong relationship and communication between Steelcase and SDI resulted in a post pilot solution that incorporated the various levels of feedback received and ultimately delivered the best solution for the client.

At the end of the year-long program, feedback showed overwhelming growth in humility, empathy, and trust among the global leadership team. Almost all leaders who went through the program demonstrated growth in all areas, better equipping them to collaborate with their personnel and facilitate company growth. Several participants shared stories of pivotal moments in their growth, showing that GLDE reinvented the framework of leadership at Steelcase.

Consistency in leadership facilitates consistency in employees. The most effective leaders are those who are in constant development, thinking critically about themselves and the needs of their company and employees. SDI’s partnership with the Steelcase GLDE initiative focused on facilitating these effective leadership skills and more. The concept evolved participants into leaders who were more efficient in their roles and more compassionate when approaching their workforce.

One aspect that made the program especially effective was SDI’s unique interpersonal approach and established relationship with Steelcase. We were always engaging in open dialogue, realigning the needs of the program based on feedback communicated to us. Rather than fostering a client-vendor relationship, SDI forms true partnerships by constantly engaging and communicating.

The final success of the program emerged when Steelcase was able to connect its global leaders through collaboration in one centralized program. With this program, uniform leadership styles were delivered, allowing Steelcase to continuously develop impactful leaders as it continues to grow.